In accordance with its founding regulation, EFCA may acquire, rent or charter the equipment that is necessary for the implementation of JDPs. In addition, in cooperation with Frontex and EMSA, the agency has to support national authorities in carrying out coastguard functions by, among other things, sharing assets and other capabilities.

Within the abovementioned legislative framework and following an open call for tender for the chartering of an offshore fisheries patrol vessel, EFCA chartered Lundy Sentinel from Sentinel Marine Ltd at the end of 2017.

Lundy Sentinel is deployed primarily as a fisheries patrol vessel in international, EU and where possible non-member country waters in the different JDPs and other operations from the Mediterranean and Black Sea, to the western waters, North Sea and Baltic Sea.

Lundy Sentinel can also contribute to multipurpose tasks in the framework of European cooperation on coastguard functions, such as search and rescue, sea border control and detection of pollution, in cooperation with Member State authorities and/or Frontex and EMSA.

The framework contract has been signed for an initial period of 24 months and may be renewed twice for periods of 12 months each at EFCA’s request, for a total contract duration of 4 years.

‘This additional inspection platform deployed by EFCA in cooperation with the Member States and the European Commission will enhance the European Union capacity to improve compliance, harmonisation and effectiveness of fisheries control operations including its international dimension without prejudice to other commitments with regards to the European cooperation on coastguard functions,’ says Pascal Savouret, EFCA Executive Director.

On a temporary basis, EFCA has also chartered since September 2021 and through the European Maritime Safety Agency (EMSA) the vessel Aegis for fisheries control in the waters adjoining the United Kingdom.

In addition to the seaborne means of control and depending on the operational needs, EFCA may contract aerial surveillance services through Frontex. These means may support the operations of the chartered vessel. 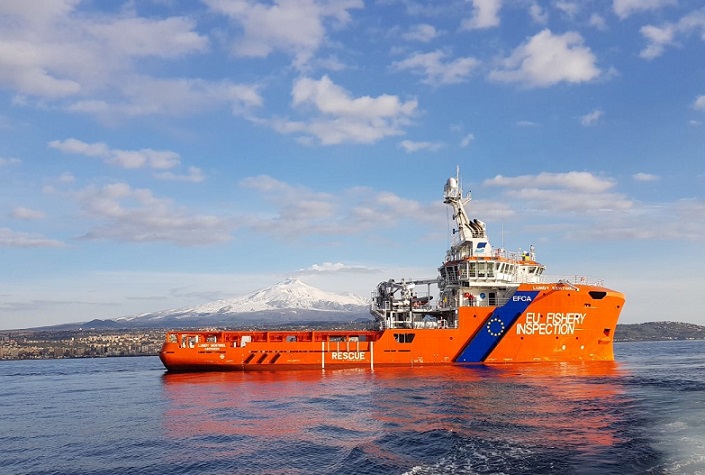